Supernaut were an Australian glam pop band from Perth. Formed as a pub rock group, Moby Dick, by British-born brothers Chris Burnham on guitar and Joe Burnham on drums, they were joined late in 1974 by fellow immigrant, Gary Twinn on lead vocals. After Randall Murphy joined on bass guitar they changed their name. The group's debut single, "I Like It Both Ways" (May 1976), was produced by Molly Meldrum and was heavily promoted on his TV pop music show, Countdown. It peaked at No. 16 on the Kent Music Report singles chart. Their self-titled debut album reached No. 13 on the related Kent Music Report albums chart in November of that year. Murphy had left in June 1976 and was permanently replaced on bass guitar by Philip Foxman in August. The album provided another single, "Too Hot to Touch" (September 1976), which appeared at No. 14. In April 1979 the group trimmed their name to the Nauts, returned to a heavier pub rock sound and released a second album of that name in December 1979. They disbanded by March of the following year with reformations occurring in 2007 and 2016.

Supernaut were formed as Moby Dick, a pub rock group, by British-born brothers Chris Burnham on guitar and Joe Burnham on drums.[1] Fellow British immigrant, Gary Twinn, joined on lead vocals (ex-Sidewinders) in late 1974.[1] Soon after Randall Murphy took up bass guitar and they changed their name to Supernaut.[1] The name references, "Supernaut" (September 1972), a track by British heavy metal group, Black Sabbath.[1]Australian musicologist, Ian McFarlane, observed, "despite the heavyweight name, the band... developed a commercially-minded glam rock style that relied as much on visual impact as the sound of the music."[1]

The group relocated to Melbourne and were signed to Polydor Records in 1976 upon recommendation from Molly Meldrum,[1] (in turn tipped off by Paul McCartney).[2][3][4][5] In May 1976 they released their debut single, "I Like It Both Ways", which was produced by Meldrum.[1][6][7] The song was initially shunned by some commercial radio stations in Sydney because of its controversial lyrics,[8][9] however promotion on Meldrum's TV pop music show, Countdown, encouraged radio stations to play the track.[9] "I Like It Both Ways" peaked at No. 16 on the Kent Music Report singles chart.[10][11]

By November they had supported gigs by "Lou Reed, Suzie Quatro and Sweet and wherever they play there is raging hysteria."[8] Julie Meldrum of The Canberra Times described their performance in Narrabundah, "trouble began when Perth rock group Supernaut, which thrives on 'bopper' appeal, came on stage. The crowd made a rush for the group and many had to be forcibly removed. Alter the group finished its set organisers had to appeal for the crowd to move back from the stage 'or else someone will get hurt'."[19]

In 1977 the band released two original singles, "Young and Innocent" (April)[20][21] and "The Kids Are out Tonight" (July),[22][23] and a cover version of "Let's Spend the Night Together" (November) originally by the Rolling Stones.[24] They worked extensively on recording sessions for a proposed second album, working titles included Exile and Test Pressing.[1] "The Kids Are out Tonight" came from those sessions.[9] After more than a year they realised their music style was out of touch and the project was abandoned.[1][25] In April 1978 they released another single, "Unemployed".[1][26] before leaving Polydor.

The group relocated to Sydney and were signed to Robie Porter's Wizard Records in mid-1978; they returned to their original pub rock influences, "[they] adopted a quasi-punk/new-wave direction".[1] With the addition of Noel Kennedy on keyboard, they released, "Spies" (December 1978)[27]McFarlane noticed their, "live repertoire included cover versions of material by David Bowie, the Stranglers, XTC, and the Doors."[1] They shortened their name to the Nauts in April 1979 and released, "Black Market World".[1][28] They followed with a new album (produced by Porter) under that name in December 1979.[1] They disbanded by March 1980.[1]

Two years later Gary Twinn was back in the United Kingdom where he formed Twenty Flight Rockers with former Generation X drummer Mark Laff,[29][30] and later played with rock supergroup, the International Swingers.[31] Chris Burnham played in The Saints with Chris Bailey from 1982 and 1989.[32][33] Philip Foxman formed Illustrated Man in 1984 with Japan member Rob Dean, Gary Numan keyboardist Roger Mason, and Hugo Burnham from Gang of Four. They recorded one self-titled album and toured the UK and US with their single, "Head Over Heels", charting the top 20 on MTV's dance charts. Foxman later had a solo career releasing two albums, West 4th and Charles and Up Antenna, as well as being a musical composer for Off Broadway show, Atomic, which ran for a limited season at the Acorn Theater, New York City.[34]

Supernaut reformed for the Countdown Spectacular 2 Tour of Australia from late-August to early-September 2007.[34][35] In 2016 Supernaut commemorated the 40th anniversary of "I Like It Both Ways" with a three-day tour from 16 to 18 June, followed by another show on 25 June at Charles Hotel in Perth.[36][37][38]

Perth band Supernaut evolved from the pub band, Moby Dick, in 1974. The band consisted of English migrants Gary Twinn (vocals) brothers Chris and Joey Burnham (guitar and drums respectively) and Australian Phillip Foxman on bass
SUPERNAUT signed with PolyGram and in the middle of 1976 “I LIKE IT BOTH WAYS” was released as their first single. Melbourne radio picked up on the song right away but it was the band’s appearance on ABC’s “COUNTDOWN” that really brought SUPERNAUT to the Australian public’s attention. Around the country radio stations banned the song because of “lyrical content”. But after an appearance on Channel Nine’s BANDSTAND in Sydney and yet another on COUNTDOWN “BOTH WAYS” hit number one on the record charts and SUPERNAUT was everywhere. As if to confirm the boy’s success they finally found their fourth member, bass player Philip Foxman.

With all engines firing Gary, Chris, Joe and Philip began a relentless schedule of touring, TV shows and of course, recording a follow-up single. On the tail of “BOTH WAYS”, “TOO HOT TO TOUCH” hit the top spot and by Christmas SUPERNAUT had a gold album. Amidst all of these events had come the Australian music industry’s annual “KING OF POP AWARDS”. SUPERNAUT were presented with two: best new band and best video for “I LIKE IT BOTH WAYS”. Incredibly in almost exactly a year the lads had taken the ride of a lifetime.

From leaving school and home to becoming rock stars. More singles followed with another album “THE NAUTS” Wizard Records, singles “ Spies, followed by, I don’t want to be like you”.

The band reformed for the Countdown Spectacular 2, 2007. 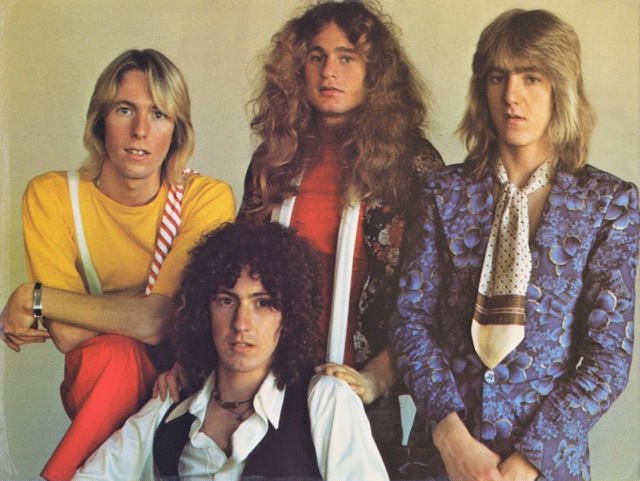